‘My mind was made up’

David had always wanted to use drugs. Until one day, he didn’t. 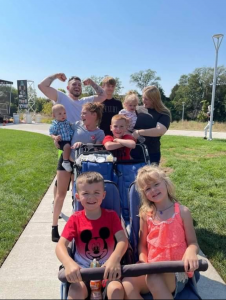 Like most little boys, David Tierney wanted to be just like his dad when he grew up. But David’s dad dealt and used drugs.

“I remember being 11 and seeing him smoke crack, and I just couldn’t wait to smoke crack,” he said. “At the age of 12, I had the opportunity. I was 15 when I tried meth, and that was it. That was my drug of choice my entire life. I just wanted to be a drug addict.”

Until one day, he didn’t. Today, David is 8 months sober – but more than that, he’s finding recovery.

Sobriety is usually about appeasing someone else, but recovery is a lifestyle you choose for yourself, says Heidi Heckaman, a recovery coach and team leader for the South Bend Recovery Café, a joint outreach between the Upper Room and Oaklawn. She’s been working with David for a little over a year. “He’s trying to better himself and eliminate some of those addict mentalities, so he’s doing really great,” she said.

David’s path to recovery is complicated – like most. He got kicked out of school when he was 14 and went to work roofing until he joined the National Guard at 17. He was a regular substance user from the time he was 15 to 25. There were times when the substance use negatively impacted his life – like his relationship with his children and ex-wife, or when he got kicked out of the Guard after failing a drug test. In many ways, he maintained a normal life – he held a job and owned a home. But he also dealt drugs on the side.

In 2014, he was arrested for selling drugs and went to prison.

He was released on probation in 2017. He had a stint of sobriety, but eventually started to use again. He violated his probation and was sentenced to house arrest in 2021. That’s when he found the Upper Room. He got sober again but relapsed four months later.

“I went back to the streets for a month before I was finally like, ‘I don’t want this,’ ” he said. “The last time I got high it was different. I didn’t enjoy it because my mind was made up.” He didn’t want to be an addict anymore.

He went to rehab in Fort Wayne in January this year. When he got back from rehab, he went to jail for violating his house arrest.

“July 18 when my court date came, I was sitting in jail, miserable, thinking I was going back to prison,” David said. “The judge said, ‘You were messing up really bad and I see you yourself asked for help,’ and she said, ‘That’s a big step.’ So now I’m in court six months later, she said, ‘I’m going to let you go back and prove everybody wrong.’ She let me out and now I’m here.”

He’s still under house arrest – for a few more months. He’s in treatment at Oaklawn. And he’s honest about the fact that he still wants to use – every day. But using doesn’t align with his goals.

“I know I’ll never reach my goals if I use. So that’s what I keep in mind,” he says. “Treatment is day by day. I focus on my support. The groups are good for certain things. I really like having the fellowship there.” And his faith has become an important part of his life and recovery.

Now, he’s discovering that his calling is to help others.

“He’s always trying to help other people,” Heckaman said. “He has such a big heart.”

He serves as an RA for the Upper Room, a resource for the other residents and visitors to the church’s soup kitchen or the Recovery Café. He’s taking Recovery Coach training this fall and plans to apply to be a coach once he hits the required one-year anniversary of his sobriety. Someday, he hopes to run his own rehabilitation center.

“My kids make me happy and my life makes me happy, but my real happiness comes from when I benefit somebody else’s life,” he said. “That’s something that will last and stand with them forever.”